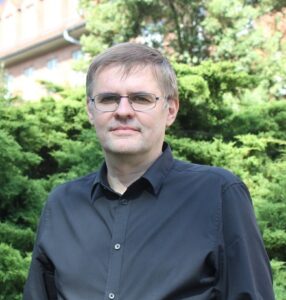 In the Neuroplasticity and Metabolism Research Group, we strive to define the precise mechanism that regulates peripheral metabolism by the brain. We focus on regulation of eating – especially the feeling of hunger and satiety. We are interested in how neurons modify their activity in response to both internal and external signals, informing the brain of such physiological states. In this context, we study genes involved in the regulation of neuroplasticity, such as Dicer and c-fos. Understanding these phenomena will help in the fight against eating disorders such as anorexia and the pandemic of the modern world – obesity.

Witold Konopka received his Ph.D. in neurobiology at the Nencki Institute of Experimental Biology PAS in Warsaw. During his doctoral studies, he developed a procedure for generating transgenic animals (both mice and rats) at the Nencki Institute. Then he spent several years on a postdoctoral fellowship at the German Cancer Research Center (DKFZ) in Heidelberg, where he initiated the topic of research on the brain – controlled metabolism, dependent on microRNAs in neurons. For last years, he has been the head of the Laboratory of Animal Models at the Nencki Institute, continuing research on animal models in the context of cognitive functions and metabolism. At the Nencki Institute, he was the deputy director for scientific affairs. From March 2021, Witold Konopka leads the Neuroplasticity and Metabolism Research Group at Łukasiewicz-PORT.

Olga graduated with honors from the University of Warmia and Mazury in Olsztyn, where she studied Biotechnology with a specialization in Molecular Biotechnology. As a part of her master thesis, she conducted research at the Animal Physiology Department, which enabled identification of the Pregnancy-Associated Glycoprotein family in the Pine marten, the Eurasian otter and the Siberian roe deer genomes. After graduation, started cooperation with a pharmaceutical company, where she worked for over three years in Quality Control Department, taking care of the drugs safety. Then she gained her experience at the Nencki Institute of Experimental Biology PAS in Warsaw, where she dealt with animal genotyping, production of AAV viral vectors and cryopreservation of mouse embryos and sperm.

Agnieszka obtained her BSc degree in Biotechnology and MSc degree in Medicinal Chemistry at Wroclaw University of Science and Technology. While studying, she gained multidisciplinary background conducting Bachelor Thesis in the Department of Microbiology and Medicinal Chemistry and Master Thesis in the Department of Organic and Pharmaceutical Technology. She also accomplished Postgraduate Studies in Molecular Biology at Jagiellonian University in Krakow. After graduation, Agnieszka worked as a Specialist in the Quality Control Laboratory in one of the leading chemical companies in Poland.

Current research focuses on determining the activity-dependent expression of genes in neurons, local synaptic plasticity, and the function of microRNAs in neurons and adipose tissue. Ultimately, all the introduced genetic manipulations aim at showing their influence on the behavior and metabolism of the entire organism.

The aim of the project is to define a role of microRNAs in synaptic plasticity in neurons involved in the formation of the memory trace. We are looking for microRNAs involved in the regulation of the PI3K-Akt-mTOR pathway e.g. miR-103/107. We have recently shown that loss of all microRNAs enhances memory formation in mice (Konopka et al., 2010). To study the PI3K-Akt-mTOR pathway we are using inducible, conditional Dicer and Pten genes knock-outs. For prolonged cognitive mouse testing we have developed a special protocols fro the IntelliCage system (Kiryk et al., 2020).

Role of microRNAs in AgRP neurons in the development of obesity

Identity of cell subpopulation in the hypothalamus which is crucial for development of the obesity phenotype following microRNA loss in the forebrain of transgenic mutants (Vinnikov et al., 2014).

c-fos in arcuate nucleus during fasting

We demonstrated that c-Fos expression is changed in arcuate nucleus during fasting. Strong c-Fos signal is observed from 3 to 24 hours after food removal. c-Fos expression colocalize with AgRP/NPY neurons in medial part of arcuate. Moreover, we are able to induce c-Fos expression using optogenetics in fed mice. To investigate its role in control of food intake, we are working on silencing c-Fos expression with LV vectors and CRISPAR technology.

The role of microRNAs in cells of peripheral tissues involved in metabolism e.g. adipose tissue. We are focusing on investigating microRNAs induced during calorie restriction and their impact on subsequent motivation of animals to food seeking. Additionally, we are studying a function of microRNAs in thermogenesis generated in brown adipose tissue.

We are testing four diets: standard, Western Diet, High Fat Diet and ketogenic diet in mice and their influence on the composition of the microbiome. We are also monitoring the metabolic parameters and the way brain controls amount of calories animals consume. The ultimate goal in the laboratory is to combine cognitive and metabolic projects and test mice fed different diets in advanced cognitive tests in the IntelliCage.

To examine the coding potential of long noncoding RNAs (lncRNAs) in 2012, a suite of programs for integrating transcriptomic and proteomic datasets called Pinstripe was developed in the group of Prof. John Mattick (Gascoigne et al., 2012). In order to confirm the presence of the identified potential hormones, in the collaboration with the Biological and Chemical Research Centre, University of Warsaw, we searched the proteomic data obtained from human cerebrospinal fluid against the database of 226 new peptides/hormones. We have identified one potential protein/hormone that is being intensively studied to define its function in the context of hunger / satiety regulation.

Methods and techniques used in the laboratory:

© 2021 Wykonanie: sm32 STUDIO
We use cookies on our website to give you the most relevant experience by remembering your preferences and repeat visits. By clicking “Accept All”, you consent to the use of ALL the cookies. However, you may visit "Cookie Settings" to provide a controlled consent.
Cookie SettingsAccept All
Manage consent

This website uses cookies to improve your experience while you navigate through the website. Out of these, the cookies that are categorized as necessary are stored on your browser as they are essential for the working of basic functionalities of the website. We also use third-party cookies that help us analyze and understand how you use this website. These cookies will be stored in your browser only with your consent. You also have the option to opt-out of these cookies. But opting out of some of these cookies may affect your browsing experience.
SAVE & ACCEPT